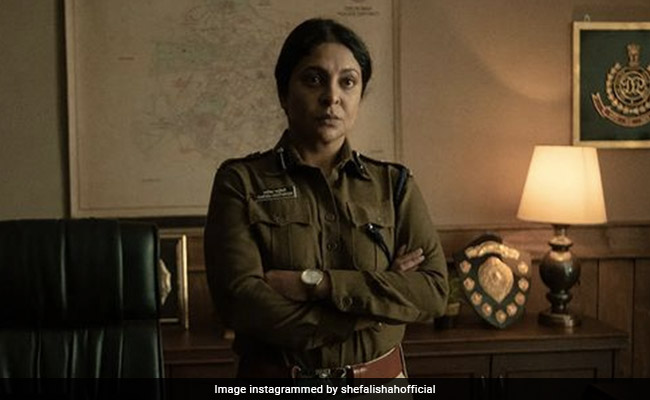 The show opens with quadruple murders. Two elderly couples are bludgeoned to death in a South Delhi bungalow. Their battered bodies are discovered by the housemaid the next morning. DCP Vartika Chaturvedi and her team swing into action. What follows isn’t a conventional whodunnit, but a painstaking and gripping grind interrupted by reverses and dead-ends.

Although the principal components at play here are pretty much the same as before, Delhi Crime Season 2, a five-part crime drama that never loosens its grip on the audience, is decidedly different in textual essence, if not in tone and texture, from its International Emmy award-winning predecessor.

The new season of the Netflix series, however, stays firmly in touch with the realistic mode that the seven episodes of the opening season employed in its pointed portrayal of crime and policing in India’s national capital, a diverse urban expanse that has no more than 130-odd police personnel per 100,000 of the city’s population.

The first season’s principal focus was on a blood-curdling crime that shook Delhi to the core. Here, the investigating cops – the same as the ones in Season 1 – are under the spotlight as they struggle to balance the professional and the personal, the general and the infinitesimal, in the line of duty.

Taut and riveting, Delhi Crime S2 is a deep dive into the lives of the key members of the police team. It delves into the challenges that the cops must encounter and surmount both on the work front and at home as they probe a spate of gruesome murders that trigger wave of panic in the city.

Delhi Crime S2, created by Richie Mehta (who helmed S1) and directed by Tanuj Chopra, is an intense police procedural set apart from most other such shows by the space and scope that it carves out for the women – Shefali Shah, Rasika Dugal (both reprising the roles they played in S1) and Tillotama Shome (cast in a role that is miles away from her comfort zone but into which she slips without breaking a sweat).

The trio consummately etches out vivid, relatable individuals grappling with psychological and emotional strife of varying degrees. In the process, they leave a huge imprint on the show and lend it a distinctive resonance. Like they did in Season 1, both Shah and Dugal are in police attire, but neither is anything like the other.

With the addition of Shome to the cast, the show acquires another intriguing facet. Each of the three principal female characters has clearly distinguishing traits. The three actors miss no beat as they tellingly and subtly capture the minutest shifts in mood, emotion and behaviour.

Rajesh Tailang as Inspector Bhupendra Singh, Anuraag Arora as Jairaj, Sidharth Bhardwaj as Subhash Gupta and Gopal Datt as Sudhir Kumar are back as part of DCP Chaturvedi’s core team. Adil Hussain returns as police commissioner Kumar Vijay. Added to the cast in significant roles are Jatin Goswami and Danish Husain. Together, they form a formidable ensemble.

Amid the hurly-burly of a difficult crime investigation, the show foregrounds domestic turmoil. DCP Chaturvedi (Shah) has her hands full dealing with a rebellious teenage daughter (Yashaswini Dayama). Inspector Bhupendra Singh, too, has a daughter who he falls foul of. ACP Neeti Singh (Dugal) is caught between her professional commitments and her army man-husband (Aakash Dahiya) who is on leave and demands that she too should take a break from work.

Their lives outside the police station are no cakewalk. The police personnel that DCP Chaturvedi leads never cease to be real people with real personal and domestic issues, which lends the show an enriching layer that ensures that the drama transcends the limitations of the genre.

At the same time, the show never loses sight of the crux of the tale – the multiple murders and the pursuit of the offenders. Dashes of near-documentary realism are brought to bear upon the depiction of the case that DCP Chatruvedi and her squad strive to crack, sparking surprising repercussions.

It is the nature of their job that thrusts them into extraordinary situations when crimes that they can barely comprehend occur and they are called upon to risk life, limb and peace of mind to go after the criminals.

Season 1, even as it delineated the compulsions of the men and women charged with capturing the perpetrators of a shocking crime, was intent on laying bare all the essential aspects of the 2012 Nirbhaya gangrape that shook Delhi.

In Season 2, based on former Delhi top cop Neeraj Kumar’s book Moon Gazer, the series of murders is sensational all right, but the writers of the show adroitly blend fact and fiction to facilitate a rounded probe into the class tensions that are rife in a sprawling city where one-third of the population lives in slums and serves the wealthy, a group of people with the highest per capita income in the country.

The modus operandi of the criminal gang that roams free and targets vulnerable senior citizens is reminiscent of the brutal kaccha-baniyan gang of the 1990s. But, as DCP Chaturvedi figures out quickly, it is anything but an open and shut case.

A SHO brought out of retirement to help DCP Chaturvedi and her team because of his vast experience in handling cases involving ‘denotified criminal tribes’ is driven by ingrained biases. For the understaffed and overworked police force, matters are aggravated manifold by the moral questions that they must confront on a daily basis in a notoriously difficult-to-police metropolis.

The city itself, the crime scenes and the investigating team’s workplace, all key sites of the action, are captured in all their shades of darkness by cinematographer David Bolen (who shot Ivan Ayr’s 2018 film Soni in a similar setting).

DCP Chaturvedi takes it all on the chin as police commissioner Kumar Vijay and celebrity lawyer Vineet Singh (Danish Husain), who fights for victims of investigative overreach, corner her as the investigation runs into rough weather owing to the overt excesses of one of the key members of the team.

Yawning income disparities, deep-rooted social prejudices, police corruption, media trials aimed at grabbing eyeballs at the expense of truth, the painting of an entire community with the same brush for the transgressions of a handful, the pressures that higher-ups exert on cops to deliver results to manipulate public sentiments – these overlapping and urgent themes are impeccably integrated in this crime and punishment drama that addresses the many fault lines that Indian society is up against.

At once illuminating and disquieting, perceptive and powerful, Delhi Crime Season 2, a portrait of a city at war with itself, is every step of the way a worthy follow-up to the true events-inspired police drama that redefined the genre for good.

Papad, Kachori And More: 5 Tasty Snacks You Can Make From Urad Dal

To Natasha Poonawalla On Her Birthday, With Love From Kareena Kapoor, Malaika Arora And Others