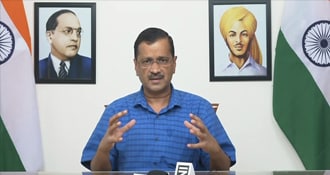 Reacting to CBI raids on his deputy Manish Sisodia over Delhi government’s now-withdrawn policy on liquor sales, Delhi Chief Minister Arvind Kejriwal said the action is “welcome” and they “will cooperate fully”, but expressed confidence that “nothing will come out”. The raids at 20 locations, including Mr Sisodia’s official residence, are to probe alleged corruption in the New Excise Policy of the Delhi government that was withdrawn after the case some weeks ago.

Mr Kejriwal, in his tweet, sought to underline Mr Sisodia’s work to improve schools by mentioning that the raids come on “a day when the Delhi education model was praised and Manish Sisodia’s picture printed on the front page of America’s largest newspaper NYT (New York Times)”.

“There have been many raids in the past as well. Nothing came out. Again, nothing will come out,” he wrote, in Hindi, sharing a tweet by Manish Sisodia in which he said AAP leaders are “kattar imaandar” (staunchly honest).

Mr Sisodia too said the “CBI has come, it is welcome”, adding, “It is very unfortunate that those who do good work in our country are harassed like this. That is why our country has not yet become Number 1.”

Earlier this morning, Mr Sisodia shared the NYT front page that the chief minister was referring to.

The world watches, as Delhi shows the way forward. pic.twitter.com/9uBQ73sEWb

“We are building a future for lakhs of children,” Mr Sisodia later wrote in the tweet about the CBI action.

Punjab Chief Minister Bhagwant Mann, who leads the party’s other state government, also made the point about the NYT article. “Manish Sisodia is the best Education Minister in India since Independence,” he tweeted in Hindi.

“Today the largest US newspaper NYT printed his photo on the front page. And today Modi ji sent CBI to his house. How will India progress like this?” he added, blaming Prime Minister Narendra Modi for the action.

Three-Time Champion Novak Djokovic Pulls Out Of US Open