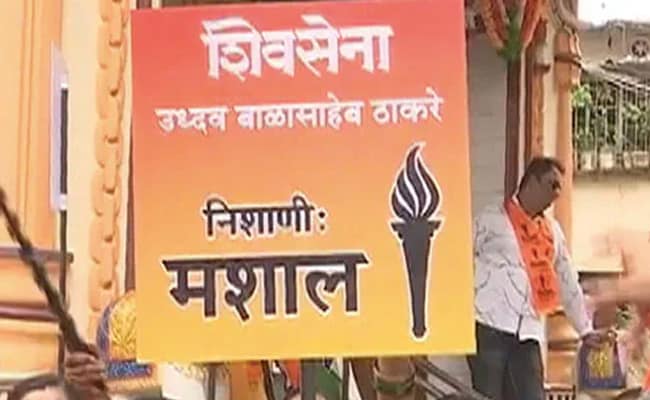 Justice Sanjeev Narula noted the petitioner party, which claimed the flaming torch or ‘Mashaal‘ symbol belonged to it and it had contested elections on it, was de-recognised in 2004. The party had also not shown any right over the symbol in its favour, he said.

“In the absence of any right demonstrable before the court, the petitioner cannot seek a mandamus for quashing the impugned communication (by EC)…The petitioner has not demonstrated any right over the symbol. The court is not inclined to entertain this petition. Dismissed,” the court said.

“Since the petitioner lost its status as a registered state party in 2004, the right, if any, on the symbol has lapsed after the expiry of six years (from the date of withdrawal of recognition in terms of the Election Symbols Order),” noted the court.

The petitioner assailed the Election Commission order dated October 10 on grounds that ‘flaming torch’ was a “reserved” symbol and could not have been given to Shiv Sena (Uddhav Balasaheb Thackeray) without first issuing a notification that it had been made a “free” symbol.

In its plea, the petitioner stated it was formed in 1994 by George Fernandes and Nitish Kumar as an “offshoot of the Janata Dal” and was given the ‘flaming torch’ symbol by the EC.

The petitioner’s lawyer, Advocate Kamlesh Kumar Mishra, also informed the court that it contested the 2014 Lok Sabha election on the flaming torch symbol.

The court, however, noted even if the petitioner was allotted the symbol in question in 2014, it does not give rise to a “vested right” in respect of its allotment and that the petitioner has contested under a different election symbol after that.

The Election Commission, represented by lawyer Sidhant Kumar, defended the allotment and said there was no requirement under the law to issue any notification, as claimed by the petitioner, before passing the allotment order.

He also said the petitioner party was de-recognised in 2004 and currently has no right over the flaming torch symbol.

While dealing with the dispute between the rival factions of the Shiv Sena, the EC had on October 10 issued a communication allotting the flaming torch symbol to the Uddhav Thackeray faction for the time being. It had said the symbol was not in the list of free symbols and was an “erstwhile reserved symbol” of the now derecognised Samata Party but it has decided to allot the same on a request to declare it a free symbol.

Eknath Shinde, the current Maharashtra Chief Minister and the leader of the rival Shiv Sena faction, had raised a banner of revolt against Thackeray earlier this year, accusing him of entering into an “unnatural alliance” with the Congress and the NCP.

Over 40 of the Shiv Sena’s 55 MLAs had supported Eknath Shinde, forcing the resignation of Uddhav Thackeray from the post of Maharashtra Chief Minister.

Following Thackeray’s resignation, Mr Shinde became the Chief Minister with the support of the BJP.

Twelve of the 18 Lok Sabha members of the Shiv Sena also came out in support of Mr Shinde, who later claimed to be the leader of the original Shiv Sena.

The Andheri East bypoll next month is the first after Mr Shinde and the BJP unseated the MVA from power and formed a coalition government.

The Thackeray has already approached the Delhi High Court seeking quashing of the order of the Election Commission freezing party name – Shiv Sena and its election symbol ‘bow and arrow’.

Won’t Join BJP, RSS Even If They Make Me PM Or President: Siddaramaiah

With Mega-Hacking Of AIIMS Servers, What May Be At Risk