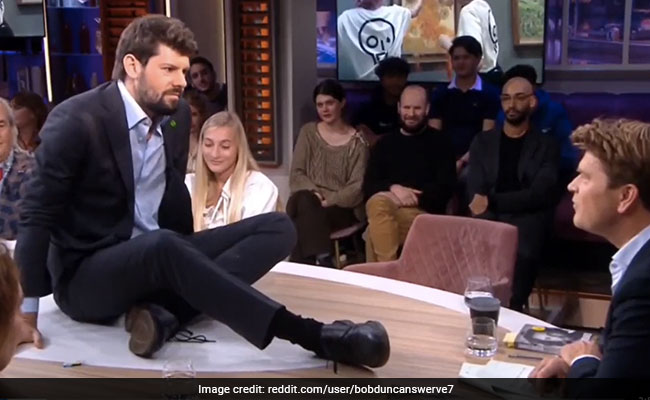 Climate activist Jelle de Graaf on the table during the broadcast.

A climate activist glued himself to the table of a Dutch television show on Tuesday evening. The video of the incident is gaining traction on social media. Local news websites dutchnews.nl identified the activist as Jelle de Graaf. He was discussing the recent protests by activists where they threw food items onto art, like the Van Gogh soup incident, on the talk show Jinek. During the conversation, the activist suddenly climbed on top of the talk show table and glued himself to it.

“I’m stuck here on a live program, and I’m going to talk about the climate and the ecological crisis. People are going to die Beau,” he told presenter Beau van Erven Dorens, according to dutchnews.nl.

The news presenter continued talking to the activist, as seen in the video, calling his action not “very sympathetic and civilized,” reported another local outlet NL Times.

During the commercial break, the table was carried away from the studio as De Graaf shouted, reported dutchnews.nl. the workers tilted the table and the activist slipped off it and was able to move his hands freely, the outlet further reported.

There have been a number of incidents where climate activists have thrown food over art to draw attention to the crisis the world is facing. Activists from Just Stop Oil went to Madame Tussauds in London to smear the wax statue of King Charles III with cake on Monday.

Then on Thursday, an activist glued himself to Johannes Vermeer’s “Girl with a Pearl Earring” at a Dutch museum. Three men were arrested after the attack at The Hague’s Mauritshuis museum on the 1665 masterpiece which has inspired a bestselling novel and a Hollywood film.

it sector outlook: Which sector should you avoid now? Pashupati Advani answers

Man Jumps Into Ocean After Ring Falls In During Proposal