Congress leader Shashi Tharoor today said Indian-origin Hindu Rishi Sunak’s becoming the Prime Minister of Britain has lessons for India. Can someone who is not Hindu, Sikh, Buddhist or Jain become PM of India, he asked, building on — and refining — his argument about need to empower “visible minorities”.

He was earlier trolled over the “visible minority” argument on Twitter as people cited his fellow Congress leader Manmohan Singh, a Sikh, having been PM for 10 years. He was also told that Muslims and Sikhs have been President, the Constitutional Head of State, though that’s a largely ceremonial role in India.

“Dr Manmohan Singh absolutely does belong to a visible minority. But most Hindus don’t see Sikhs as different from themselves,” the former international diplomat argued, speaking to NDTV.

“Can we still imagine a day — in our increasingly majoritarian polity that the BJP is very much behind — when someone who is not a Hindu, Jain or Sikh or Buddhist can head our national government (as PM)?” he added, stressing that the Hindutva  ideology sees all religions born in the Indian subcontinent as similar, “Indic” religions. “But they (Hindutva followers) don’t see others the same way.”

Stressing that Rishi Sunak has been an overt practitioner of Hinduism, Mr Tharoor recalled how former UK PM Winston Churchill had called Hindus “a beastly people with a beastly religion”.

“Can you imagine an overt Christian or an overt Muslim, public about their faith, being embraced by the BJP as a fit Prime Minister for India?” he said.

India’s ruling BJP, which espouses Hindutva or “Hindu nationalism” as its ideology, does not have any Muslim MP.

He recalled “public fulminations” about Sonia Gandhi’s Italian and Christian original after she led a Congress alliance to victory and was tipped to be PM. She stepped aside for Manmohan Singh. “One prominent politician threatened to shave her head if she became PM,” he recalled, about BJP’s Sushma Swaraj, who went on to become India’s foreign minister.

“I believe we need to acknowledge — and I’ve been a critic of British racism — that they’ve chosen to anoint as their leader a brown-skinned Hindu after a history of overt racism… They’ve outgrown their worst attributes,” he said.

Rishi Sunak is “from an ethnicity that Brits in the past would have considered inferior”, Mr Tharoor further added, on the day Mr Sunak was appointed successor to Liz Truss, who had to quit after just six weeks as the UK faces a price-rise crisis.

“I am glad we are celebrating this because I am hoping this will make us reflect on our own country,” Mr Tharoor said, “What we can learn from Rishi Sunak’s triumph is that race is certainly a factor but not the only one.”

“The BJP is being disingenuous when they claim we’ve already got to where the British have got to,” he added. 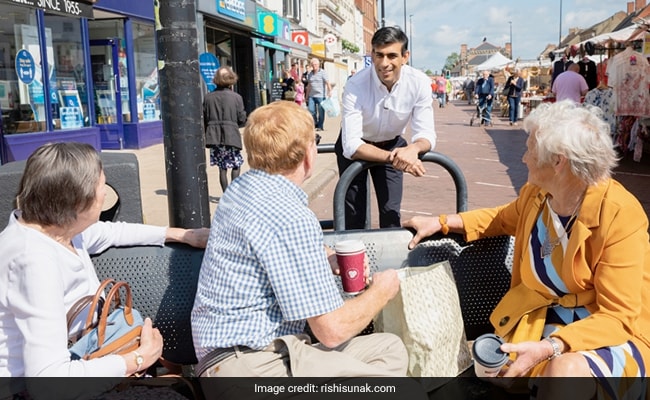 “Rishi Sunak’s age is also something that the BJP will not talk about. In this I blame not just the BJP but all parties,” he said.

At 42, Rishi Sunak is the youngest UK PM in two centuries.

Noting that Rishi Sunak became finance minister of the UK in 2020, just five years after first becoming MP. “In India he’d still be sporting, at best, a Minister of State tag.”

Mr Tharoor, 66 now, was around 53 years old when he became Minister of State, essentially a junior minister, in Manmohan Singh’s cabinet in 2009, serving up to 2014.

Adani only top billionaire to gain wealth since last Diwali

Make Sure AAP Does Not Remove Gandhi’s Photo From Notes, Gujarat BJP’s Dig