A still from the video. (courtesy: ayan_mukerji)

Keeping the momentum high, Ayan Mukerji has shared a new teaser of Brahmastra, and this time, offering a glimpse of Shiva (Ranbir Kapoor), on whom the movie is based. Along with a clip, he dropped a note stating that some fans in the comment section had asked him not to share the clips or shots from the movie. Assuring the fans, he wrote that fans need not worry as the “actual movie is a whole other experience.” He added that in the theatre, the movie would be “new and fresh”.

He wrote, “We finally finally finished our last touches onBrahmastraearly this morning… Monday, the day of Shiv, which feels so right. Also feels right to share a small glimpse of our Shiva on this Monday – the man who’s story this film really is! I hear some comments telling me to stop sharing clips and more shots from the movie…But for those who are watching our units and feel that way…Don’t worry. The actual movie is a whole other experience. Truly Everything about Brahmastra will be new and fresh on the big screen.”

He signed off by saying, “A little bit about the 3D Experience. I am so so excited for our audiences to watch it in 3D, with our final Sound and Music! Going to watch the final 3D Print myself soon and if I’m getting excited about it personally after having lived with every shot in this movie for so long, am so hopeful about what others will Feel. The Week of Brahmastra‘s Release is here! Can’t believe it. Need a new word to describe what we’re all feeling…”

Alia Bhatt also shared Ayan Mukerji’s note on her Instagram stories and captioned it as “Must read”. Check out the post below: 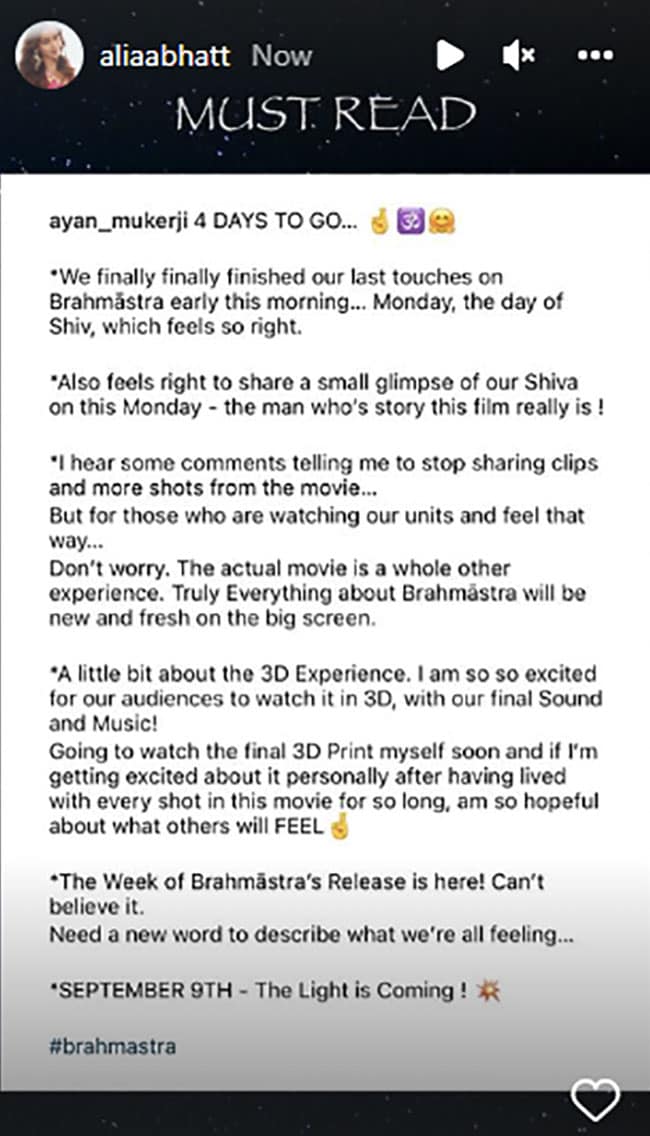 Easy Lunch Recipe: These Yummy Lauki Koftas Will Be Ready In No Time

Taylor Swift Won Artist Of The Year. List Of Winners