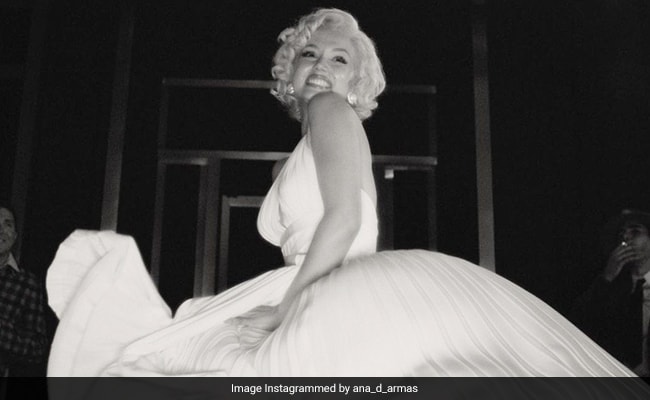 Andrew Dominik’s  Blonde, anything but a biopic of the conventional kind, delivers a fragmented and flawed portrayal of the incessant turmoil of Marilyn Monroe’s life in and beyond the Hollywood spotlight. It is an unrelentingly bleak commentary on stardom and the toll it takes on a woman yearning in vain for emotional anchors.

Flashes of stylistic brilliance are only to be expected from the director of Killing Them Softly and The Assassination of Jesse James by the Coward Robert Ford, but these are too few and far between to collectively translate into a consistently hypnotic piece of cinema.

The only thing in the mostly black and white, A-rated Netflix film that does not waver at all is Ana de Armas’ interpretation of the blonde bombshell who wanted to be much more than what the world was willing to let her be. Confusion, vulnerability, thwarted aspirations, hurt and hope intermingle imperceptibly in her remarkably layered performance.

The punishing length – Blonde is nearly three hours long – the plodding pace, the whimsical structure and the overwrought stylisation combine to make this a film that is almost as exacting as the ebbs of the life that it puts on the screen.

Messy divorces, an abortion, a miscarriage, several humiliating encounters with men and other unsettling reverses overshadow the hype and hoopla that surround the advent of “the newest box-office sensation”.

Red carpet events where Marilyn is the centre of attraction, delirious fans chanting her name, shutterbugs falling over each other to capture every moment of her life – the rise and rise of Marilyn Monroe quickly erases the vestiges of Norma Jean, a little girl pining for a father she has never seen.

Based on Joyce Carol Oates turn-of-the-millennium novel of the same name, Dominik’s screenplay struggles to strike a balance between fictional flourishes and the factual elements as it pieces together the causes of – and the circumstances in which – Marilyn Monroe descending into enervating despair in an industry where glitz and glamour mattered much more than the deep scars on a ruthlessly exploited woman’s soul.

In a role that tests her to the fullest, Armas is stunningly good, giving the lie to the doubts expressed over the wisdom of casting a Cuban-Spanish actress as Marilyn Monroe. She sinks completely into the role and becomes the person she plays in every conceivable way. She glides through a range of emotions and psychological somersaults in the face of the grave harm that the men in her life and demands of her movie career do to her.

The occasional surreal passages that Dominik weaves into the film, when at their best, shine through and lend the intense drama a distinctive tone and texture. However, Blonde errs in dealing with Monroe’s unending troubles with a somewhat heavy hand that leads to monotony. In the bargain the film falls short of being consistently intriguing and moving.

In one scene, Marilyn says: “It’s been so wonderful this past year, like a fairy tale.” In another, she says to the Ex-Athlete who is now her husband: “I’ve been happy all my life.” The irony of these utterances is self-evident in the light of what has gone before and what is to come in a life buffeted by waves of misfortune.

It is Norma Jean’s desperate and infructuous attempts to not let the Marilyn Monroe myth subsume her entire being that take centrestage and push all other facets of the woman’s life and times out of the frame. The grey portrait of pain is exhausting at times because Blonde opts not to carve out space for anything other than the crushing indignities that are heaped upon the protagonist.

Blonde is more a Freudian drama than a typical Hollywood biopic. It roots all of Monroe’s miseries in a childhood trauma whose effects she is never able to shrug off. Norma is an orphan. Her mentally ill mother is institutionalised when she is only seven years old and the little girl has no idea who her father is. All that her mother lets on is that he was “a titan in the industry’.

Later in the film, a “tearful father” writes letters to her “beautiful lost daughter” promising to contact her soon in person. His continued absence and the vow to make amends are represented by a reassuring voice that at points seems capable of restoring Marilyn’s faith in life and men. Her severe daddy fixation impacts her relationship with her husbands, leaving her at the mercy of masculine whims.

On the day that she first steps into the office of a Hollywood bigwig, Marilyn is subjected to a sexual assault. By the time she has been through many other such experiences, Blonde stages an encounter between a US President – “the boyishly handsome leader of the free world” – and the fraught Hollywood diva. In a timorous monologue addressed to her own self in the middle of the act, she wonders why she has ended up where she has.

She is asked: Who gave you a start in the movies? Her reply sums up her confusion: “I guess I was discovered.” The film is, of course, not so much about how she landed up in the industry or who spotted her as about her own discovery of the high price that one must pay in order to achieve and sustain stardom in a toxic industry swarming with powerful men preying on the weak.

Norma Jean forays into the movies as a rank outsider, as an absolutely clueless ingenue, as a lamb to the slaughter. Over the next decade and a bit – that is all she was allowed by a brutally self-serving world – Marilyn seeks happiness and fulfilment only to find grief waiting for her at every turn.

That is pretty much the story of Blonde. Its search for highs does not always yield the best results. The film has a line spoken in the context of Marilyn Monroe’s fate: the soul does not always show on the face. Blonde, too, has a soul that does not fully reflect on the face.

Navratri 2022: 9 Forms Of Durga And The Special Prasad Offered To Them

Samantha Ruth Prabhu Is Not Just Another Face In The Crowd