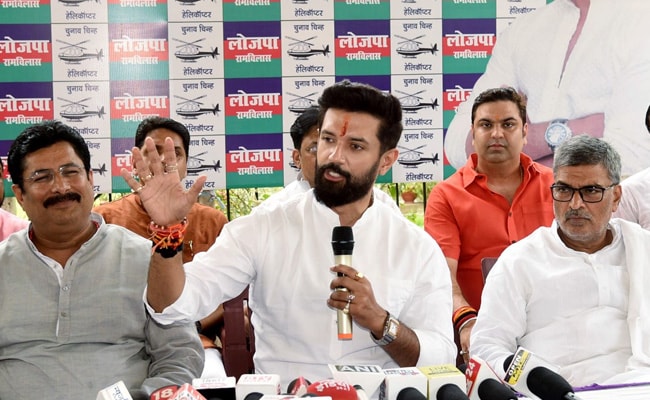 The BJP’s clarification comes amid murmurs that he was angry with the BJP.

Lok Janshakti Party (Ram Vilas) chief Chirag Paswan will campaign for the National Democratic Alliance for the upcoming by-polls in the state, BJP’s Bihar President today clarified amid growing murmurs that the young leader was angry with the BJP.

Sanjay Jaiswal, addressing the media today, claimed Chirag Paswan “has always been” with the BJP and will even campaign for the NDA alliance in the two seats on October 31 and November 1.

“All constituent parties of the alliance are putting their energies into this,” he said, pointing out that alliance partners are together, as was clear from the polls for the post of President and Vice President.

Mr Jaiswal also made serious allegations against the grand alliance government in the state, accusing the incumbent Mokama MLA — Rashtriya Janata Dal’s Anant Kumar Singh — of threatening traders and shopkeepers in the constituency.

“His supporters are threatening shopkeepers that their shops will be looted if they don’t vote for the RJD,” Mr Jaiswal said.

By-polls in Bihar’s two assembly seats — Mokama and Gopalganj — will be held on November 3. Votes will be counted on November 6.

Chirag Paswan, who was part of the BJP-led National Democratic Alliance (NDA), contested the 2020 Bihar election on his own and failed to make a mark. Last year, his uncle Pashupati Paras broke away and formed his own outfit.

He had in late August asserted that he will not be part of any coalition which included Pashupati Kumar Paras, his rebellious uncle who is a cabinet minister at the Centre.

The JD(U) also accused him of having worked as a “mohra” (pawn) of the BJP in the last assembly polls, a charge he denies. Mr Paswan had rebelled against the JD(U) in the 2020 assembly polls in the state, claiming that he wanted to dislodge Nitish Kumar from power and help the BJP form its own government.

The BJP stuck with Mr Kumar and left Mr Paswan in the lurch, as it already had support of most LJP MLAs. He has since been disillusioned with PM Modi and the BJP.

Mr Paswan, who had once called himself “Hanuman” to Prime Minister Narendra Modi’s Lord Ram, was further enraged after his family’s “humiliating” eviction from the government bungalow allotted to his father, Union Minister Ram Vilas Paswan.

“I have been on my own path in the past year and a half. There is no point in an alliance where there is no mutual respect,” he had later said.

By-election in Mokama was necessitated after Anant Kumar Singh was disqualified in July this year by the Bihar Vidhan Sabha following his conviction in a case related to the recovery of arms and ammunition, including an AK-47 assault rifle, from his residence in Patna in 2019. Mr Singh was sentenced to 10 years imprisonment in the case by a special court on June 21 this year.

The by-election in Gopalganj was necessitated following the death of its sitting MLA and former minister Subhash Prasad Singh on August 16 this year.

Jaya Bachchan On Why She Is Disgusted By Media