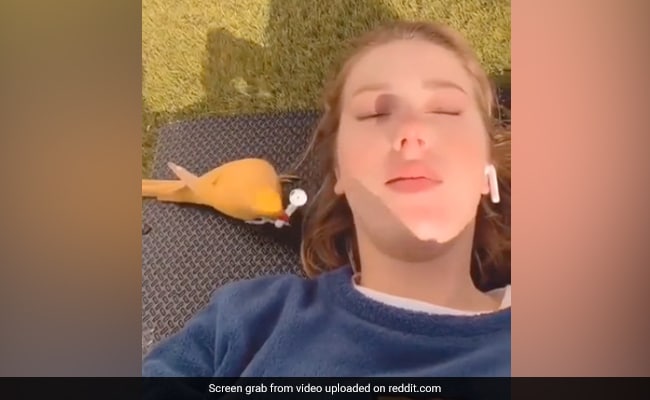 The bird flies away after stealing one earbud.

Animals are fun creatures. Living around pets not only has a positive impact on our physical health but also keeps our mental and emotional well being in check. It is very common to come across various incidents where monkeys have stolen things from human beings at hill stations. Be it a bottle of juice or a packet of chips- they take it all. But in a viral video, a bird took it a notch higher and stole an earbud from a woman using it.

The video, posted on Reddit, shows a woman lying on the ground, soaking in the sun wearing earbuds. In just a few seconds, a yellow coloured bird comes near her and takes away one of her earbuds. The bird then flies away with the earbud stuck in its beak. The woman is stunned and even offers the bird a banana in exchange for the product, However, she fails in the process.

The video was originally posted on TikTok. The 32-second clip later appeared on other social media platforms, on Reddit it was posted with the caption, “Sound Police.” The video was posted on October 29 and since then it has amassed 649 upvotes.

Many internet users were left laughing after watching the clip. One user commented, “Banana for AirPod? Nope! Do birds like bananas?”

A few months ago, another video of a bird flying away with a woman’s pizza went viral on social media. In the video, first, the woman can be seen coming back to her table and sees an empty open pizza box. In the background, she can also be heard saying, “Oh my god, who ate the pizza.” As soon as she says that, she points the camera to the sky, and the bird can be seen flying away with the whole pizza.

How To Make Tandoori Chaap For Mid-Week Indulgence

'Was Shattered Seeing Bruises On Her Neck': Shraddha Walkar's Manager At Work

Amazon’s Job Cuts Not Done Yet, To Extend Into Next Year