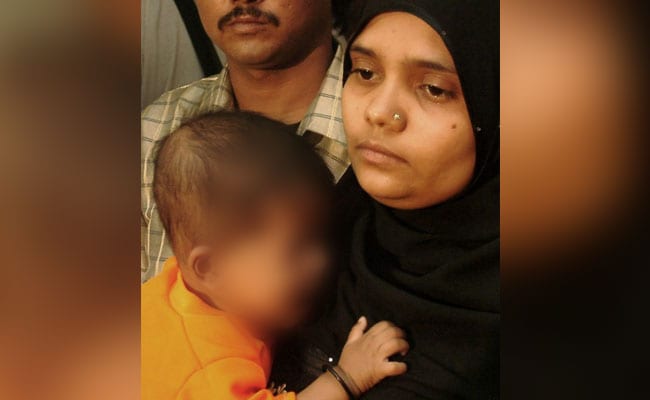 Bilkis Bano was five months’ pregnant when she was gangraped during the 2002 Gujarat riots.

The 11 men convicted for the rape of Bilkis Bano and released by the Gujarat government after 15-odd years in jail, are “Brahmins” and have “good sanskaar“, the BJP’s sitting MLA from Godhra has said. Amid the countrywide outrage over the men’s release, CK Raulji has backed the men, who were feted with sweets and garlands after their release.

CK Raulji was one of the two BJP leaders who were part of the Gujarat government panel that unanimously decided to release the rapists. The decision was taken after one of the convicts approached the Supreme Court seeking remission and the matter was passed onto the state government.

“I don’t know whether they committed any crime or not. But there has to be intention of committing crime,” CK Raulji is heard telling the reporter from Mojo Story.

“They were Brahmins and Brahmins are known to have good sanskaar. It might have been someone’s ill intention to corner and punish them,” added the MLA in the interview, which is circulating widely on social media. The convicts, he added, had good conduct while in jail.

The rapists walked free on Independence Day, hours after Prime Minister Narendra Modi spoke of women’s empowerment from the ramparts of the Red Fort. Shortly after, videos showing their warm welcome by a right-wing group emerged.

In face of a barrage of criticism, the Gujarat government defended its decision, saying it considered the release plea as per a 1992 policy, as directed by the Supreme Court, because that was in effect at the time of the conviction in 2008.

The move — made in contravention with the current rules which bar remission for convicts of rape and murder — has appalled many. The opposition parties have been vocal against it.

“They are Brahmins, Men of Good Sanskaar. Their conduct in jail was good”: BJP MLA #CKRaulji BJP now terms rapists as ‘Men of Good Sanskar’. This is the lowest a party can ever stoop!” his tweet read.

“They are Brahmins, Men of Good Sanskaar. Their conduct in jail was good”: BJP MLA #CKRaulji

BJP now terms rapists as ‘Men of Good Sanskar’. This is the lowest a party can ever stoop! @KTRTRS@pbhushan1pic.twitter.com/iuOZ9JTbhh

Trinamool Congress’s Mahua Moitra tweeted that the nation “had better decide whether Bilkis Bano is a woman or a Muslim”.

Senior Congress leader P Chidambaram tweeted that along with CK Raulji and Suman Chauhan, “Another member (of the panel reviewing the remission appeal) was Shri Murli Mulchandani who was a key witness for the prosecution in the Godhra Train burning case!”

Bilkis Bano was 21 years old and five months’ pregnant when she was gangraped during the 2002 Gujarat riots. Seven members of her family were murdered, among them her three-year-old daughter whose head was bashed with rocks. Seven other relatives, who she says were also killed, were declared “missing”.

She spent years in hiding, constantly shifting home, till the rapists were jailed. After the release, she has been too shell-shocked to consider the next steps, to take thought of safety or any legal recourse. She has asked the Gujarat government to reverse its decision and “ensure that my family and I are kept safe”.

Rakul Preet Singh Vibes With The "Teeny Girl" In Her. See Pics

Boat With AK-47s Belongs To Australian, No Terror Angle Yet: Minister

"Aukat Samajhta Hoon": J Ramesh On Not Being In Congress President Race