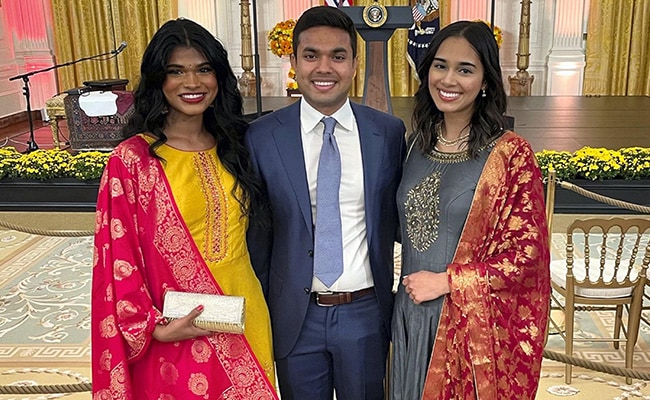 In a show of solidarity with the Deferred Action Legal Childhood Arrivals (DALCA) children who are facing extradition from the US, President Joe Biden has invited three young Indian Americans to his Diwali reception.

DALCA children are those who have aged out of their parent’s visa or legal status and face extradition. There are over 200,000 such children in the US, majority of whom are Indian Americans.

Thanking Biden for the gesture, the three young Indian Americans said they were “delighted to join” the President and Vice President Kamala Harris at the White House.

“We were honoured to be with the President and Vice President among many Indian American leaders for this Diwali celebration. We hope that light will come for all of us by the end of the year through a solution to end aging-out for all children of long-term visa holders,” said Dip Patel.

Mr Patel is the founder of ‘Improve The Dream’ organisation which has been fighting on behalf of the children who have grown up in the US as child dependents of long-term visa holders, but face self-deportation after aging-out.

About 200,000 young immigrants are in the US as dependents of their parents on temporary work visas because of the outdated laws of the country, he said.

He and two of his colleagues — Pareen Mhatre and Athulya Rajakumar — at ‘Improve the Dream’ were invited by Biden and First Lady Jill Biden to attend the Diwali reception at the White House on Monday.

“Diwali has always been a cherished festival for me and my family. I am so honoured to be able to advocate on behalf of ‘Improve The Dream’ and help bring light to our cause. It was a surreal feeling meeting South Asian trailblazers at the White House to celebrate the festival of lights that is so close to our hearts,” Ms Mhatre said.

Echoing similar sentiments, Ms Rajakumar said, “We feel honoured to have been recognised and invited by President Biden and his administration to this year’s magnificent Diwali celebration. Our presence here shows that the President and the administration have heard our stories and they care.”

In his remarks at the Diwali function, President Biden thanked the community for making the celebration of Diwali such a joyous part of American culture.

“As we – we see it across the country: opening homes and hearts and exchanging gifts and sweets, and hosting feasts and – for family and friends, organizing cultural programs that bring us together as a people,” he said.

“Through all that you contribute, as well beyond, in every part of American life, thank you. Thank you for reflecting the soul of who we are as a nation,” the President said.