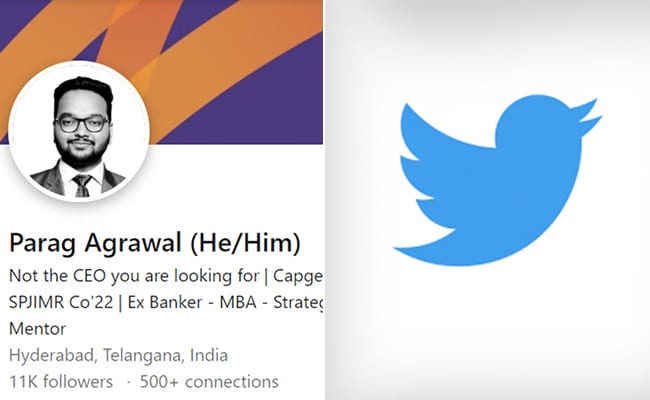 In a Linkedin post, he explained why he changed his bio.

A Hyderabad-based banker named Parag Agrawal has claimed that his profile views on Linkedin have shot up by 36 per cent after Twitter CEO was sacked. With a sudden spike in his profile views, the banker decided to change his Linkedin bio to read, “Not the CEO you are looking for.”

In a Linkedin post, he explained, “After the Twitter CEO was fired, my profile views have shot up by 36 per cent. So, to help folks with finding the right Parag, I have changed my profile page headline.”

His post has gone viral and has more than 83,000 reactions and several comments on Linkedin.

A user wrote, “Funny. Thoughtful of you but what about the spike around sep 18? That seems even steeper and the Twitter guy wasn’t fired then. Also on my profile, views went up 67%. That being said, your name being the same as he isn’t the only factor that caused that 36% hike. LinkedIn search is better than that. I gave it a shot. I got to CEO Agrawal’s page without stopping over on any other Parag’s or Agrawal’s page. That 36% is mostly your number my man. Your achievement. Keep doing what you’re doing.” Another user commented, “I definitely looked up his LinkedIn!”

Billionaire Elon Musk, Tesla chief and the new owner of Twitter, in his first big move following his $44 billion acquisition of the social media giant after over six months of public drama, immediately fired the former Chief Executive Officer Parag Agrawal along with several other top leaders.

The 38-year-old was one of the youngest to reach the helm of a big technology company. He was also the youngest CEO of an S&P 500 company.

Mr Agrawal was appointed as the first Indian-origin CEO of Twitter in November 2021. The IIT Bombay and Stanford alumnus joined the company in 2011 when there were fewer than 1,000 employees. He became the company’s chief technology officer (CTO) in 2017.

hindustan aeronautics shares: Chart Check: Up 100% in a year! This aerospace stock is set to hit record highs in next 2 months; time to buy?

Gujarat Bridge That Fell After Renovation Didn’t Have Fitness Certificate