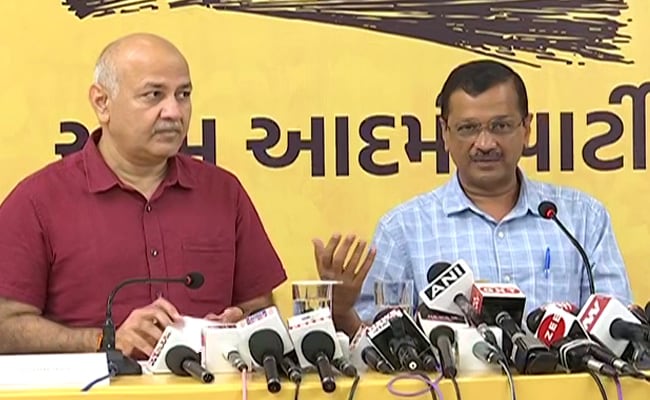 Delhi Chief Minister Arvind Kejriwal on Monday sought to position the contest between the BJP and the Aam Aadmi Party (AAP) in the upcoming Gujarat Assembly polls as a “Dharamyudh” like the Mahabharat where the ruling outfit has the “armies” of probe agencies CBI and the ED on its side, while his party has the “support of Lord Krishna”.

Arvind Kejriwal, who is also the AAP convener, compared the BJP with the Kauravas, the defeated villains of the Mahabharat, and his side as the Pandavas, the victorious heroes of the Hindu epic.

Addressing a townhall meeting in Himmatnagar town of Sabarkantha district of the poll-bound state, he claimed the Bharatiya Janata Party (BJP)-ruled Gujarat is yearning for a change and the AAP has received immense support from people.

This was the reason why the Central Bureau of Investigation (CBI) raided the home of Deputy Chief Minister Manish Sisodia, in connection with the Delhi Excise Policy, the AAP’s national convener said.

Sisodia, who holds education and finance among a host of key portfolios in the Delhi government, who was also present in the town hall programme.

“This is a Dharamyudh (religious war) like the Mahabharat,” Kejriwal said, and narrated the story of how Duryodhan (from Kauravas) and Arjun (from Pandavas) approached Lord Krishna for support before the 18-day war began.

Arjun said he wanted Lord Krishna on his side, while Duryodhan sought his army, the CM said.

“Today, these people (a reference to BJP) have all the armies, power, the CBI, the ED (Enforcement Directorate), the Income Tax, police and a lot of money. We have Shree Krishna with us. We have God with us. And in the end truth, God will prevail. God resides in the hearts of people, they are God. They (BJP) may harass us, but people are with us,” he said at the town hall organised by the AAP as part of its election campaign.

Kejriwal said his government in Delhi has implemented far-reaching reforms in education and healthcare which were not seen in 75 years of Independence.

“This is the reason they jailed my health minister (Satyendar Jain) two months back on the basis of a false case. The case is false. Had there been an iota of truth (in charges against him), and had Jain been even a little bit dishonest, I would have kicked him out (of Cabinet), like I did with another minister,” said the Delhi CM.

The AAP leader asserted there is zero tolerance for corruption in his government.

“We do not tolerate even a little bit of corruption. But they do not look at corruption. Two months back they jailed my health minister, and now they want to arrest Manish Sisodia in the next 3-4 days. Why? Because they want to stop the good works being done in education and healthcare,” he said.

Kejriwal said Gujarat, where the Assembly polls are due by the year-end, wants a change after 27 years of the BJP rule.

“So far Gujarat did not have an alternative. Now, they have got a good, honest alternative, and people want good works to be done in the state like what all are being done in Delhi and now Punjab (also ruled by AAP),” said the bureaucrat-turned-politician.

He told the gathering that in Delhi, even the rich people get themselves treated in government hospitals and their children are joining state-run schools from private educational institutes.

“The central government should have called Manish Sisodia and asked him to improve the condition of schools across the country even though he belongs to another party. They did not do any such thing. Instead, they will send the CBI to arrest him. They arrested (Jain) to hinder work (in health sector) being done in Delhi. We will not let the work stop in Delhi. It may be hampered for a few days, but will not stop,” the AAP leader stated.

Kejriwal said if voted to power, the AAP will provide free and quality healthcare and education to all in Gujarat irrespective of their financial status.

He said health services as well as medicines, medical tests and operations will be free of cost, and clinics will be opened in every village and wards in cities in Gujarat on the pattern of Delhi’s “mohalla clinics.” The infrastructure of government hospitals will be improved and new medical centres will be opened if required under an AAP government, the CM said.

Kejriwal also said that voted to power in Gujarat, the AAP will ensure that people get “zero electricity bill.” “Everybody wants revdi (freebie). Only I can do so, they will not do so. This is my first guarantee. If we form a government, we will provide free electricity (up to 300 units) in three months,” he said.

Kejriwal said in Delhi, his government has ensured that employment is provided to youths.

He said the ruling BJP is least concerned about providing jobs to the youths in Gujarat because it believes people will have nobody else to vote.

He said his party will also introduce a law to curb question paper leaks if voted to power in the state.

"Real Danger Of United Nations Being Superseded By...": India Warns

Teen Dies After Being Hit By Four-Wheeler While Crossing Road In UP: Cops