Anupam Kher has proven his acting prowess in numerous television shows and films. No matter what role he picks up, he always entices the audience with his skills. While many people know him as a seasoned actor, Anupam Kher is pretty popular on Instagram too! The actor often posts about his travel destinations, little banter with his family, and foodie posts that can make anyone drool. In fact, if you follow him on social media, you will find out about the numerous indulgences he posts every few days. From sushi and noodles to a grand Kashmiri feast, the actor surely knows his way around food! Recently, he posted another one of his indulgences, but this time, he can also be seen engaging in banter with his mother.

Anupam Kher took to Instagram and shared a series of videos in his story. He shows us the rice flour roti that he is eating. In the background of the video, he can be heard saying to his mother, “Ye kya roti banai hai? (What is this roti that you have made?)” To this, his mother replies, “Ye yaha ke aate ki roti hai, Kashmir ke aate ki. Ye uthti nahi hai tawa se (This roti is made from Kashmiri aata. It is difficult to pick it up from the tawa.)”

Even in the video, he wrote, “Ye chawal ke aate ki kya roti banai hai mere liye (What is this rice flour roti that you have made for me?)”

In the second video, the actor gets up and jokingly questions his house help about what this roti is. Check it out here: 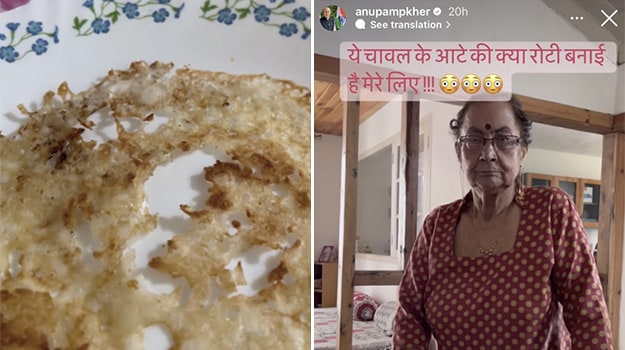 Earlier, when Anupam Kher visited his mother after a long time, his mother had started complaining that he had lost a lot of weight. To this, Anupam had replied by saying, “Paratha kha raha hun mummy, aapko kyun mein patla lagta hun? (I am having paratha; how do I look thin to you?)” You can read all about their fun conversation here.

(Also Read: Anupam Kher And His Mother’s Banter About His Food Habits Is So Relatable; Watch Video)

As Anupam Kher and his mother keep engaging in such shenanigans, we can’t wait to see what his mother will cook next for him! What do you think about it? Let us know in the comments below!

Do You Know Why Soya Chunks Are Soaked Before Cooking? Here’s The Answer

Beginner Recipe: How To Make Desi-Style Mushroom Fry In 20 Mins

Weekend Special: 5 Gluten-Free Desserts You Must Try This Weekend

Diwali 2022: How To Make Mawa Anjeer Roll For The Festive Season