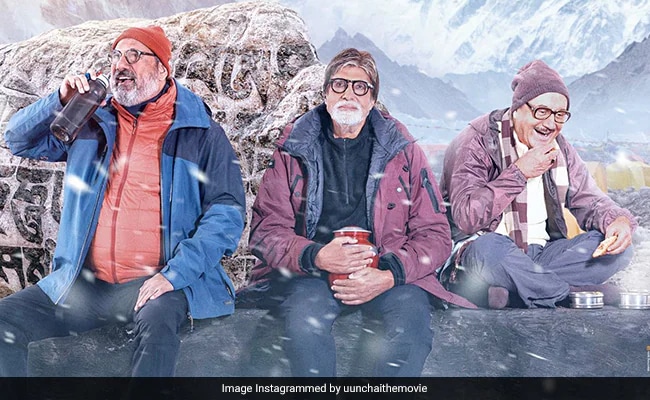 It is not every day that we get to see so many stellar actors in the same film, so when the trailer of Uunchai released on Tuesday, it made an impact for sure. The film features Bollywood veterans Amitabh Bachchan, Boman Irani, Anupam Kher and Danny Denzongpa as four friends, who have come a long way in terms of life. During a meeting, Danny Denzongpa mentions that the four of them should go to Mount Everest together. Amitabh Bachchan gives him a reality check and decides against it. As do Boman Irani and Anupam Kher, joking about their age. However, things change drastically after Danny Denzongpa’s character Bhuvan dies. His friends decide to trek to the Everest base camp – where they wish to immerse his ashes. With more than a little help from a trek leader (played by Parineeti Chopra), they decide to leave their cozy Delhi lives behind and trek to Everest Base Camp because their only motivation is “friendship.”

The road is anything but easy and they even get schooled from Parineeti Chopra and are advised to sit back and enjoy their comfortable lives instead of thinking of trekking. Amitabh Bachchan’s goosebumps-worthy monologue says it all – “We won’t sit at home. We want to climb mountains and cross rivers and explore forests.” They are joined by Sarika, who believes that accompanying them to the base camp is her only means of redemption. The trailer will make you cry and smile at the same time.

Check out the trailer of Uunchai here:

Big B, sharing a poster from the film earlier, wrote: “Proud to be a part of this special ensemble! Here we come. Make way for Uunchai on 11.11.22.”

The film also features Sarika and Neena Gupta. The film, directed by Sooraj Barjatya, will hit the theatres on November 11.

Vicky Kaushal Wraps Up Schedule Of Sam Bahadur On A "Sweet" Note; Heres How

Passenger Thrown Off Moving Train In West Bengal After Fight

“Every Cell Exploded With Joy”