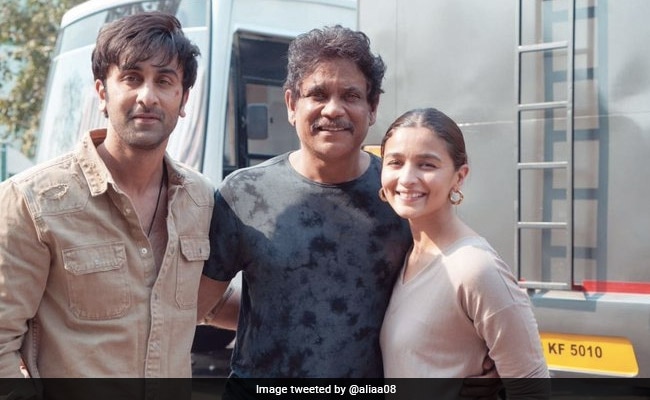 Alia Bhatt handpicked this picture to wish her Brahmastra co-star and veteran actor Nagarjuna on his 63rd birthday on Monday. Alia posted a behind-the-scene picture of herself with Nagarjuna and her husband Ranbir Kapoor from the sets o their upcoming film Brahmastra. In her tweet, the actress wrote: “Happiest birthday Nagarjuna Sir.” She added, “It has been an honour and a privilege to have worked with you.” Besides Alia Bhatt, Ranbir Kapoor and Nagarjuna, the film also stars Bollywood veteran Amitabh Bachchan and TV star Mouni Roy in pivotal roles. The film is slated to release on September 9.

Happiest birthday @iamnagarjuna sir! It has been an honour and a privilege to have worked with youpic.twitter.com/Sku4EFBj8N

The film has been directed by Ayan Mukerji and it has been produced by Karan Johar’s Dharma Productions. In the first leg of the Astra universe of films, Ranbir Kapoor’s character Shiva is a part of the mighty Brahmastra. He is represented by the element fire. Amitabh Bachchan and Nagarjuna are the protectors of the Brahmastra, while Mouni Roy represents the dark forces that wish to attain the Brahmastra. The film, after multiple delays, will finally hit the screens on September 9.

5 Hyderabadi Snacks To Make Your Tea-Time A Delicious Affair

Asked How Much He Earns In A Month, Shah Rukh Khan Answered In The Most SRK Style