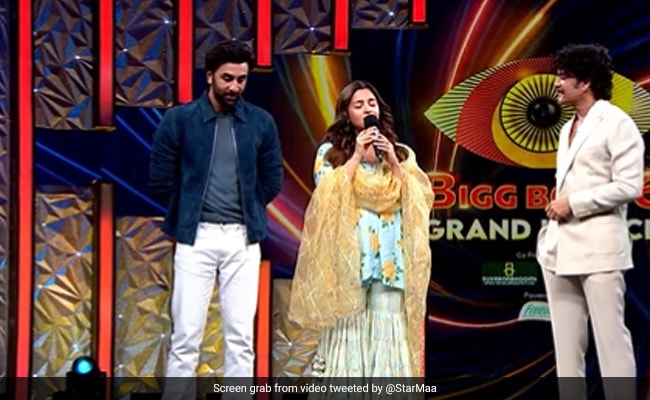 Brahmastra stars Alia Bhatt and Ranbir Kapoor checked into the sets of Bigg Boss Telugu 6 for the show’s grand launch. During the show, Alia and Ranbir shared the stage with their Brahmastra co-star and veteran actor Nagarjuna, who hosts the TV reality show. During the show, Alia sang the Telugu version of Brahmastra song Kesariya (Kumkumala in Telugu). The video from the episode was shared by the channel’s Twitter handle, the caption on which read, “Alia Bhatt sings Kumkumala song at Bigg Boss Telugu 6 Grand Launch.”

The video was later re-tweeted on the official Twitter handle of Dharma Productions, which has backed Brahmastra. “Just Alia Bhatt painting your day in all the shades of Kesariya,” read the caption.

Just @aliaa08 painting your day in all the shades of #Kesariya!#Brahmastrahttps://t.co/0FKY8NXUZZ

Brahmastra, directed by Ayan Mukerji, is slated to release on September 9 and it includes a stellar cast that also includes Amitabh Bachchan, Nagarjuna and Mouni Roy. The film is slated to release in theatres on September 9. Alia Bhatt and Ranbir Kapoor found love on the sets of the film. They got married in April this year. The star couple are expecting their first child.

In the first leg of the Astra universe of films, Ranbir Kapoor’s character Shiva is a part of the mightyBrahmastra. He is represented by the element fire. Amitabh Bachchan and Nagarjuna are the protectors of the Brahmastra, while Mouni Roy represents the dark forces that wish to attain the Brahmastra.