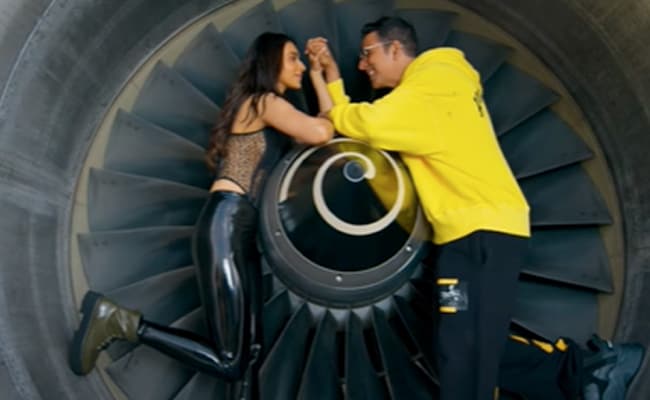 A still from the song Saathiya. (courtesy: Zee Music Company)

Akshay Kumar’s Cuttputlli is making all the noise on social media. In a bid to add more buzz, the makers have released the first song from the film, titled Saathiya. From Akshay Kumar and Rakul Preet Singh’s sizzling chemistry to the picturesque locations, the song has ticked all the boxes. Though Akshay and Rakul’s moves are smooth and in sync, it is hard to miss their eye-catching outfits. From black leather pants and corset top to a stunning yellow dress, Rakul is a sight for sore eyes. With music and lyrics by Tanishk Bagchi, Saathiya is sung by Zahrah S Khan and Nikhil D’Souza.

Cuttputlli will stream on Disney+ Hotstar from September 2. It is directed by Ranjit M Tewari and co-produced by Vashu Bhagnani, Deepshikha Deshmukh, and Jackky Bhagnani. Cuttputlli is a crime thriller in which a cop, played by Akshay Kumar, is on a mission to nab a serial killer. Akshay has shared the trailer and wrote, “3 murders, 1 city, a cop, and a serial-killer out on the loose. Cuttputlli drops on 2nd September, only on Disney + Hotstar.”

At the time of the teaser launch, Akshay Kumar had said, “Yeh khel power ka nahi, mind ka hai. Aur is mind game mein aap aur main… sab Cuttputlli hain (This game is not about power, but mind. And when it comes to mind games, we are all puppets). Dropping on Disney+ Hotstar, 2nd September.”

Cuttputlli also features Sargun Mehta and Chandrachur Singh in pivotal roles. As per a report by ETimes, it is a Hindi remake of the 2018 Tamil film Ratsasan. It featured Vishnu Vishal and Amala Paul in the lead.

In Cryptic Tweet, Amitabh Bachchan Explains He Wants To Speak His Mind But Can't. Because...