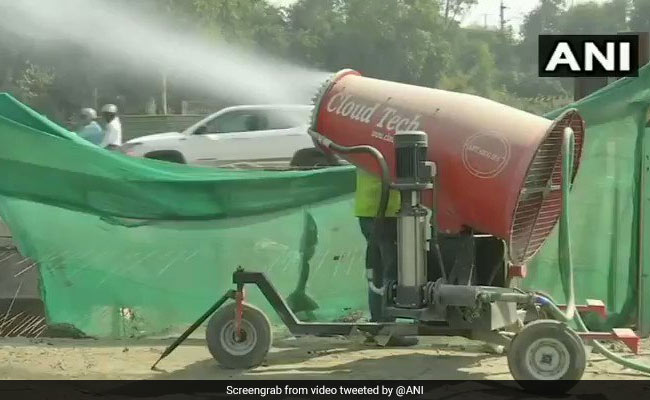 The layer of acrid smog persisting over Delhi thickened on Tuesday amid calmer winds and raging farm fires in Punjab, with the city recording a 24-hour average air quality index (AQI) of 424, the worst this year.

At a review meeting with senior officials of the Delhi government, the commission suggested that they intensify measures to control dust pollution and increase the frequency of water sprinklers and anti-smog guns.

“Since construction is banned for now, the city government can utilise the anti-smog guns and sprinklers available with these agencies,” a CAQM official said.

The official said the sharp increase in the air quality index over the last five days has “more to do with meteorological and external factors”.

“It is more about meteorology — stagnant winds and relatively night temperatures in October this year. The wind direction is changing continuously, so the net result (dispersion) is zero. This is evident from satellite images too,” he said.

The forecast is that the air quality is going to improve over the next few days and the CAQM will keep evaluating the situation constantly, the official said.

Tuesday was the second ‘severe’ air quality day in Delhi this year after January 2 (AQI 404), according to the Central Pollution Control Board (CPCB) data.

An AQI above 400 is considered “severe” and can affect healthy people and seriously impact those with existing illnesses.

The CAQM will hold a review meeting with Rajasthan, Haryana and Uttar Pradesh on Wednesday.

Two Cats Were In A Stand-Off. A Crow Started Their Fight

PM Narendra Modi To Inaugurate Airport In Arunachal, Event In Varanasi On Saturday

Railway Cop Saves Elderly Woman From Getting Slipping Under Train