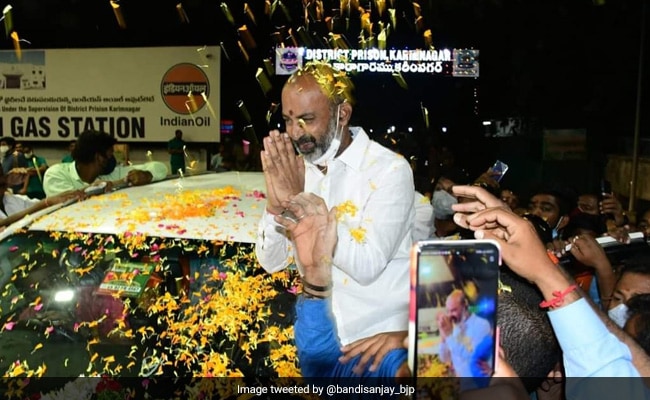 “We are surprised as to why this Commission is silent. This kind of silence and in action is worrying us and also giving an impression that the Commission is ignoring the constitutional duty invested on it to conduct free and fair elections,” the letter stated.

“We are also submitting a pen drive consisting of video footage of Sri Bandi Sanjay’s speech at Tirugundlapally road show. We hope you will take serious note of it and initiate criminal action one including immediately stopping him from talking nonsense and using criminal language by passing interim directions to him to do so,” the letter further read.

Mr Sanjay was addressing the public and the party Karyakartas while carrying out a roadshow in Thirugundlapalli and Tammadapalli in the Munugode constituency of Nalgonda district.

“TRS leaders are eyeing the lands of Munugode constituency. In the name of the election campaign, TRS Dandupalayam gang is roaming around Munugode and inquiring about lands,” he said.

The BJP State President said that a “war” has started in Telangana between the army of “Ram” and Rakshas”.

“It is a war between Ram’s and Rakshasas’ army. It is the fight between self-respect and arrogance. 15 ministers and 86 MLAs have come to the feet of the people. They are showing hope that they will give whatever they have asked for,” he said.

“TRS men are ready to distribute Rs 40 thousand for a house. But that money is earned by drinking the blood of the poor. That is the money earned by diverting central funds. KCR thinks if we throw money, poor people will vote. But, TRS should be taught a lesson by voting for the right people. You all should take the money from them but vote for BJP,” Mr Sanjay further said.

The BJP leader further alleged that KCR doesn’t care for the poor and is doing everything only as the elections are nearing.

“Similarly, when elections were held in Huzurabad and Dubbaka, funds were given for development there. It was the same in Munugodu as soon as Rajagopal Reddy resigned. Gattuppal Mandal was formed, new roads were sanctioned and money was given for the sheep,” Mr Sanjay said.

Mr Sanjay also claimed that all survey results say BJP would win the by-elections. He also alleged that because of this, KCR got “afraid” and “ran” to Delhi.

Notably, the nominations of Munugode constituency by-polls, which are scheduled to be held on November 3, ended on Monday.