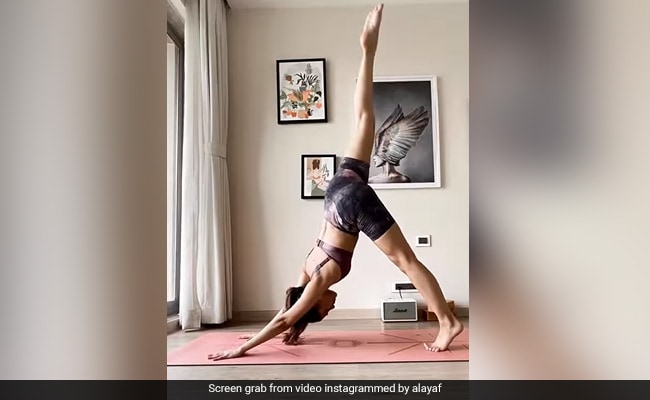 Alaya F in a still from the video. (courtesy: alayaf)

Is there anything Alaya F can’t do? From yoga to doodling, the actress is just unbeatable. Alaya also knows how to celebrate every little achievement. For example, when Alaya recently (almost) nailed a split during her yoga session, she didn’t miss the chance to tell her fans about it. On Friday, Alaya posted a video of herself practicing difficult yoga asanas in a room. Towards the end of the clip, she tries to perform a perfect and “very smooth split”. Well, she almost aces the posture to perfection. Full marks to Alaya for the honest attempt.

Sharing the post, Alaya F wrote, “Watch till the end because I am very proud of my very smooth split. Feeling powerful today,” and thanked her yoga instructor Puja Thea Amin.  Alaya F’s post left her fans and followers impressed (and we are not surprised at all). Celebrity make-up artist Namrata Soni commented, “Insane.” A fan said, “Absolutely amazing.”

It wouldn’t be wrong to say that Alaya F makes yoga looks easy-peasy. Agree? The actress, while back, floored us by sharing glimpses of herself performing a series of complex yoga poses. “Can’t think of a caption so I’ll just say, hi friends. Hope your day is going well,” she wrote. Isn’t she good at giving ROFL and quirky captions to her posts?

Let’s also take a look at how amazing Alaya F is as a dancer. Check out these videos of her grooving and practicing with choreographer Yash here:

Alaya F last seen in Jawaani Jaaneman. The film also starred Saif Ali Khan and Tabu in the lead roles. She will next be seen in Shashanka Ghosh’s Freddy, alongside Kartik Aaryan.

The Inspiration Behind Richa Chadha And Ali Fazal's Wedding Invite

To “Thangamey” Nayanthara, With Love From Vignesh Shivan. Read His Post