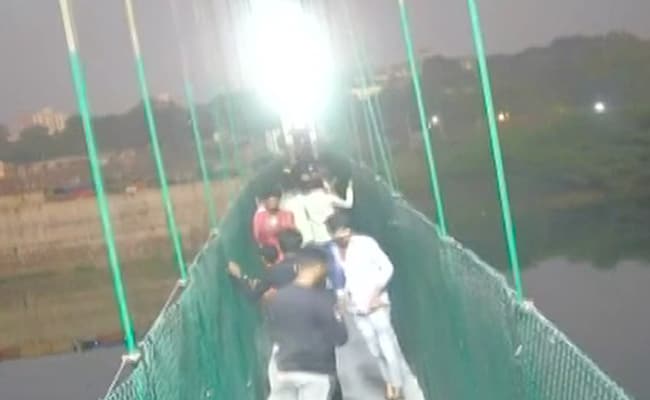 Over 130 were killed in Gujarat’s Morbi bridge collapse

As Gujarat reels from one of the deadliest bridge collapse incidents in India’s recent history, claiming at least 134 lives, PTI recounts other such tragic episodes that have shocked the nation in the past several years.

According to a 2020 study ‘Analysis of bridge failures in India from 1977 to 2017’, published in international journal ‘Structure and Infrastructure Engineering’, as many as “2,130 bridges” — excluding culverts and pedestrian bridges — have failed to provide intended service or collapsed during various phases of construction in the last four decades.

1. Darjeeling bridge collapse (2011): Thirty-two people were killed and over 60 injured when an old wooden footbridge over a spring gave away, under the pressure of crowd, during a Gorkha Janmukti Morcha (GJM) meeting at Bijanbari in Darjeeling district on October 22, 2011.

The bridge, which had been weakened by the September 18 earthquake, collapsed when a large number of people gathered on it for the meeting. 2. Arunachal Pradesh footbridge collapse (2011): Just a week after the ill-fated Darjeeling incident, a footbridge over Kameng river in Arunachal Pradesh collapsed on October 29, 2011. It collapsed when 63 people were over the bridge to catch an insect locally known as ‘tari’.

The bridge was constructed in 1987 and commissioned in 1992. At lest 30 people, mostly children, were killed in the incident.

The Hyderabad-based company IVRCL, which was constructing the flyover, described the collapse as an “act of God”, seeking to portray it as a natural calamity.

4. Majerhat flyover collapse in Kolkata (2018): In a similar incident on September 4, 2018, three people were killed and 24 were injured after a portion of South Kolkata’s over 50-year-old Majerhat bridge caved in following heavy rainfall in the city.

5. Mumbai footover bridge collapse (2019): Six people were killed and over 30 people were injured when a footover bridge near Mumbai’s Chhatrapati Shivaji Maharaj Terminus (CSMT) railway station collapsed on March 14, 2019.   The at least three-decade old bridge, connecting the bustling CSMT with the Azad Maidan police station, was audited just six months before the incident. It is maintained by the Brihanmumbai Municipal Corporation (BMC). The natural disasters in India, according to the quoted study, have made the most devastating effect on the failure of the bridge infrastructure of an order of “80.3 per cent” — based on a sample size of 2,010 bridges.

Beside natural disasters, the deterioration of material has been the reason for “10.1 per cent” of the failure of bridges, while overloading has contributed to “3.28 per cent” of bridge failures.

“There are other noticeable causes of bridge failures such as blast by dissidents and accidents with vehicles or ships,” it added.