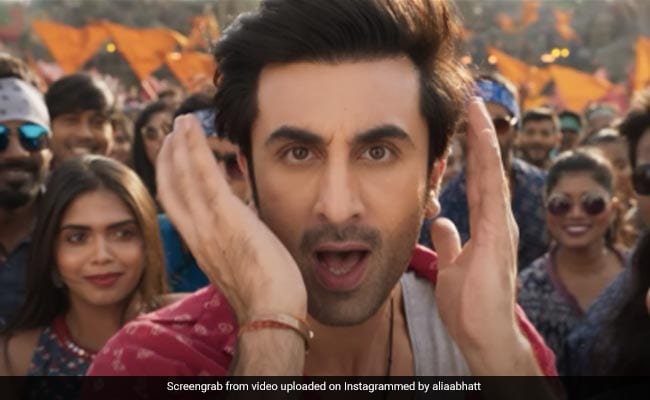 Get ready to groove to another track from Brahmastra. After Kesariyaa and Deva Deva, it is time for Dance Ka Bhoot. Karan Johar, who is one of the producers of Brahmastra, has released a teaser of the upcoming song. The clip features Ranbir Kapoor amidst a Dusshera fair.  Be it Ranbir’s moves or the colourful surroundings, it has ticked all the boxes. And, we just can’t wait to watch the full track now.  Sharing the teaser, Karan Johar wrote, “The celebration of Brahmastra – Dance Ka Bhoot. Teaser out now, stay tuned for full song.”

Fans have flooded the comment section with fire, red hearts and heart-eye emojis. The teaser, within an hour, has clocked more than 101k views on the platform.

Brahmastra‘s director Ayan Mukerji has shared a back story behind the upcoming peppy beat. Calling Dance Ka Bhoot the “biggest in terms of ambition and scale”, Ayan wrote, “Delayed twice because of the pandemic but eventually shot with stubborn patience so we could achieve the vision we wanted for it.” Ayan added that the track “celebrates Shiva’s spirit at the beginning of his journey in Brahmastra.”

He added, “In the movie, our Shiva celebrates Dussehra in DKB (as we call this song internally), and the song celebrates Shiva’s spirit at the beginning of his journey in Brahmastra… who at this stage is inspired very much by the Bholenath aspect of Lord Shiva’s grand personality – innocent, fun-loving, easy to please and celebrating life through… Dance.”

Brahmastra will also mark Ranbir Kapoor and Alia Bhatt’s first on-screen appearance. Amitabh Bachchan, Nagarjuna, and Mouni Roy are also part of the film. With this film, Ayan Mukerji is also making a comeback. The fact that Ayan has put heart and soul into his film is no longer a secret. The director has also decoded the inspiration behind Brahmastra. In a video, shared by Karan Johar, Ayan said, “The threads with which Brahmastra is woven ran very deep in me as a child. I grew up loving stories from Indian history. My father used to tell me a lot about our powerful gods and goddesses, and I was deeply affected by them… A certain spiritual depth and even science in Indian philosophy very naturally infuse the lives of most people growing up in India.”

He went on to add, “As a teenager, I became a big reader. And, like many others from my generation, I was excited by certain fantasy series from the Western world. Lord of the Rings and Harry Potter are among my all-time favourites.”

Brahmastra is slated to release on September 9.

How To Reduce Sweetness From Potatoes - Easy Tips And Tricks

When Amitabh Bachchan “Helped” Ishaan Khatter “Get Admission Into School”

Inside Sanjay Dutt’s Havan At Home In Mumbai

“We’re Definitely Going To Use In Our Future”