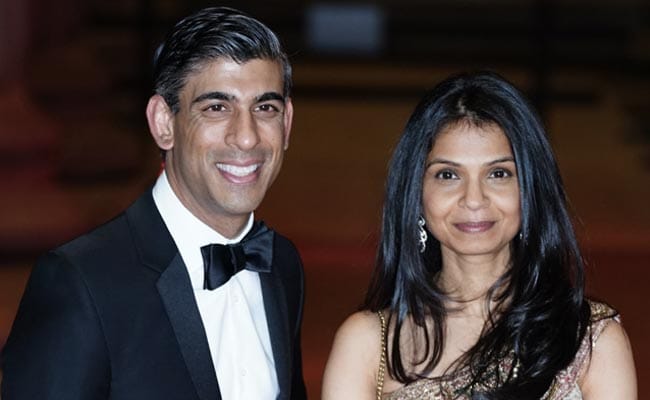 Akshata Murty met Rishi Sunak when the duo was studying at Stanford University in the US.

Akshata Murty, the daughter of Infosys co-founder Narayan Murthy and author Sudha Murty, is famously less outgoing than her husband Rishi Sunak, but that is likely to change somewhat as she becomes the first Indian First Lady to the UK’s first British Indian Prime Minister.

The 42-year-old fashion designer and venture capitalist as Director of Catamaran Ventures UK met Sunak, also 42, when the duo was studying at Stanford University in the US.

The Southampton-born new Prime Minister has spoken of how he switched his class schedule to be closer to her and the rest as they say is history. The couple got married in a two-day ceremony in Bangalore in 2006 and have two school-going daughters, Krishna and Anoushka.

“Rishi has always respected the fact that I am Indian and as proud of my country as he is of his,” Murty wrote on social media earlier this year, when her tax affairs hit the headlines.

“He’s never asked me to abandon my Indian citizenship, ties to India or my business affairs, despite the ways in which such a move would have simplified things for him politically,” she said.

It came as she relinquished her legal non-domiciled status to avoid it becoming a “distraction” for her husband’s political career, which meant she now pays taxes on all her Indian income from Infosys shares also in the UK. At the time of the media maelstrom around her non-dom status, she hit back at implications that it was in some way indicative of her stronger bond with India than the UK.

“My decision to pay UK tax on all my worldwide income will not change the fact that India remains the country of my birth, citizenship, parents’ home and place of domicile. But I love the UK too,” she said.

“In my time here I have invested in British businesses and supported British causes. My daughters are British. They are growing up in the UK. I am so proud to be here,” she added.

As an investor, Murty’s company is focussed on the consumer tech sector with a view to investing in fast-growing British brands that require strategic capital.

“Women’s skills span a larger portfolio, or maybe society allows women to express their skill sets in a wider sense – whether that be through culinary pursuit or filmmaking or investment banking or the arts,” she reflected, during an online event for International Women’s Day last year.

“Women are now learning to utilise their skills, their passions and their interests and to fit into what may be defined traditionally as success,” she said.

Recalling a class on work-life balance at Stanford University, she added: “What was interesting was this whole discussion about how women have to juggle work-life balance, especially in the corporate world.

“I was sort of puzzled because I grew up in a family of very strong women… so I never thought it was just a woman’s job to have this work-life balance. It was the family’s job to have this balance.” Her husband revealed in a recent interview that one of the secrets behind their happy marriage was that they were very different people. While he described himself as “incredibly tidy”, he fondly referred to his wife as “very messy” but also the more spontaneous one.

The Sunak family moved out of the flat above No. 10 Downing Street – the official residence used by the Chancellor of the Exchequer – in April in the wake of a controversy over Murty’s tax affairs. But Sunak insisted at the time that it had nothing to do with what had happened and more to do with the fact that their older daughter, Krishna, was in her last term of primary school and wanted to walk to school every day.

The family is now expected to divide their time between their London home at Kensington, the constituency residence in North Yorkshire, and the grace and favour homes at Downing Street and Chequers.

He Chose Chai’ Over Degree. He Now Owns Million Dollar Firm In Australia