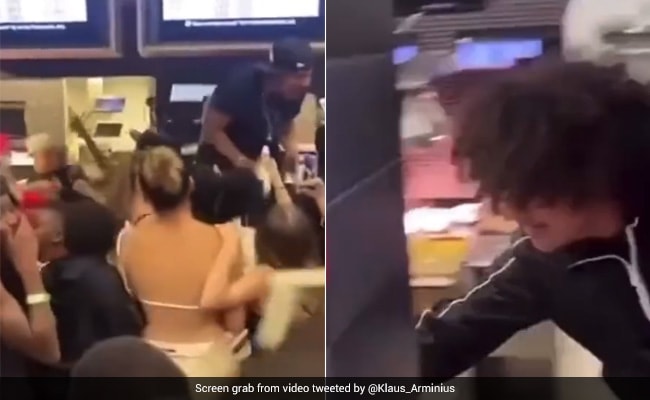 The police said that the teenagers targeted another McDonald’s outlet an hour later.

A shocking video has emerged on social media that shows dozens of youths storming a McDonald’s outlet in the United Kingdom. The teenagers are seen stealing burgers and soft drinks as the staff watches in horror. According to the BBC, the incident took place in Nottingham city centre on Sunday. It further said that the youth jumped over the counter to steal food and drink. The police have not arrested anyone on the case, saying they are treating it as commercial burglary.

The same behavior in every country but no one is allowed to notice or talk about it. pic.twitter.com/0xnKwCUuQw

According to the BBC report, at least 50 youth between the age of 14 and 16, piled into the Clumber Street outlet at about 9 pm local time.

While seven of these teenagers jumped across the counter to take the food being prepared, others filmed the act on their phones, said the outlet.

The police later said in a statement that about 20 of them abused and threatened the staff of the McDonald’s outlet.

They later said the gang targeted another outlet in Milton Street, Nottingham, about an hour later “but left the scene when officers arrived”.

“We are treating this incident very seriously. This is a commercial burglary as the group forced their way behind the counter of a business and stole food and soft drinks. It is completely unacceptable,” a spokesperson for Nottinghamshire Police said in a statement.

Last month, a woman climbed through the window of one of the McDonald’s outlets into the kitchen and made own food after the staff refused her order.

The clip was first posted on TikTok and later appeared on other platforms. It showed the woman trying to “train” herself by joining the staff inside the fast-food restaurant and prepare a takeaway order for herself. The video has gone viral, with many users seeking to know if she was successful in getting food.