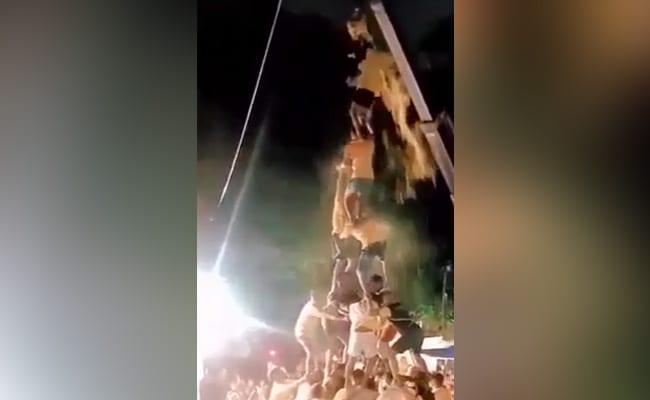 It was at Nanavati Hospital that Sandesh breathed his last.

A 24-year-old Dahi Handi participant died on Monday due to injuries caused during the Janmashtami festival in Mumbai. While initially discharged from Cooper Hospital on August 19, he was readmitted to Nanavati Hospital yesterday where he died at 9 pm today.

A harrowing video shot through a window grill shows the moments leading up to Sandesh Dalvi’s injury as well as his fall from the seventh tier of the human pyramid.

Sandesh can be seen successfully climbing to the pot and breaking it. However, immediately after that the man below him loses balance leaving Sandesh hanging on what remained of the handi.

While the man tried his best to regain his balance and support Sandesh, both of them fell from the top into a a crowd full of people. People around them rushed to their aid, and a few can be seen trying to carry them out of the crowd.

Sandesh was first taken to Cooper Hospital in Mumbai at 11 pm on August 19. While his family reportedly got him “discharged against medical advice” after getting first aid administered, Sandesh was rushed to hospital once again on August 21.

It was at Nanavati Hospital that Sandesh breathed his last.

As many as 222 ‘Govindas’ or Dahi Handi participants were injured while forming human pyramids during Janmashtami celebrations in Mumbai and 64 in Thane city, civic officials said.

Officials also said that most of the Govindas suffered injuries to their hands and legs following a fall while forming human pyramids.

Banking Stocks: 6 banking stocks with up to 38% upside price potential

Case Against UP Man For “Indecent Remarks” On Yogi Adityanath: Police

UP Man Kills Grandfather After He Refused To Buy Him Drugs: Cops