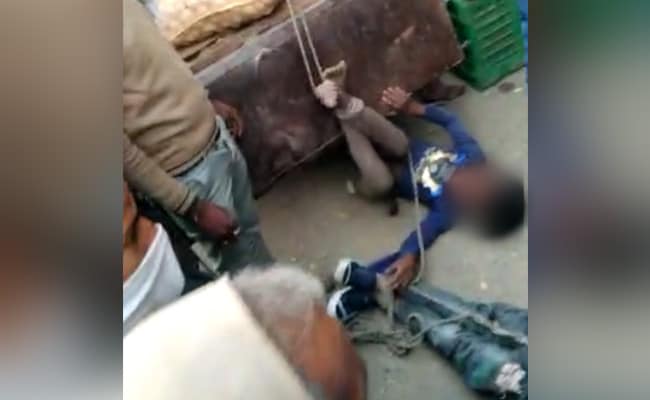 Two teens accused of theft were thrashed, their legs tied to the rear of a truck and dragged through a crowded vegetable market in Madhya Pradesh’s Indore.

A video of the incident that happened at Indore’s Choitram vegetable market has been shared widely on social media. The police have filed a case against the two teens for alleged theft, adding they are also preparing a case, based on video evidence, against those who thrashed the two minors.

Two traders and a driver have alleged the teens stole money kept in the truck while unloading vegetables. The driver said he saw them take the money.

Soon, the traders and some bystanders thrashed the two minors and tied their legs with a rope. They were forced to lie on the road on their backs, legs chained to a truck, and dragged around the vegetable market in Indore.

The police said they took the two teens to the police station and filed a case. They were later taken to hospital for treatment.

“The way they were thrashed was horrific and brutal. We will take action against the attackers too. We will identify them from the video,” Indore police officer Nihit Upadhyay told reporters.

Woman Among 3 Detained For Karnataka Lingayat Seer's Death Over "Honeytrap"

Zomato Cuts Workforce Up To 3% In Performance-Based Churn