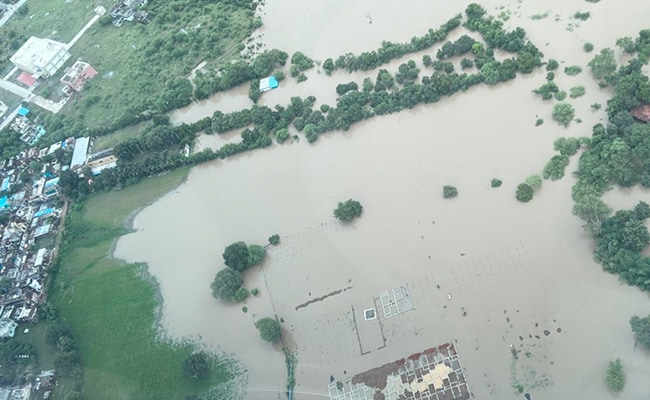 Unprecedented heavy rainfall accompanied by strong winds has affected life in Bhopal and parts of Madhya Pradesh over the last 48 hours. A biker was killed, and three others were injured as the state capital witnessed its heaviest showers since 2016.

More than 400 people have so far been rescued by teams from the State Disaster Response Force, or SDRF, National Disaster Response Force, or NDRF, and the police from various flood-hit areas of Vidisha, Rajgarh, Ashok Nagar, Raisen, Jabalpur, Mandla, Sidhi and Guna districts. All major rivers are in spate and dams are either overflowing or full to the brim, forcing the opening of lock gates to release excess water.

In the last 36 hours, Bhopal reported 14.18 inches of rain – the heaviest recorded since 2016. Along with rains, winds blowing at speeds of 33-3kmph have uprooted dozens of trees across the city and plunged 90 per cent of Bhopal into a blackout that lasted for almost 36 hours in some areas.

In view of the weather, schools in 11 districts, including Bhopal, Sehore, Rajgarh, Vidisha, Raisen and Sagar – are closed today as well.

Rescue operations are underway and around 2,300 people have so far been moved to safer locations across the state. At least 18 shelters have been built in Vidisha district, where a flood-like situation has emerged due to heavy rain over the last 24 hours. Around 1,300 people in the district have been moved to safer places. Rescue operations were being carried out on boats.

While rain has stopped since last night in Bhopal, internet and phone services are still spotty in many areas of the city.

Ved Prakash Singh, senior meteorologist with India Meteorological Department, or IMD, in Bhopal told PTI yesterday that a depression over central parts of MP near Bhopal and Sagar caused the heavy rain. The depression is likely to move westwards, towards Guna, in Madhya Pradesh, and Rajasthan.